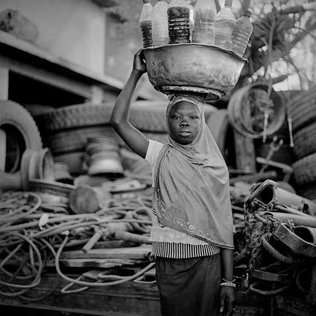 In bigger cities of Niger lots of children live on the street with little or no access to basic needs. Life is a day-to-day struggle to get food, water and shelter. They are unable to attend school, and generally survive by begging or stealing. They are seen as outcasts of society.

Many of them have been forced to work on the street because their families are too poor to send them to school, or even to feed them. Small jobs, as street vendors or cariers, are paid significantly less than adults for the same jobs. Many children often turn to substance abuse as a way of escaping the harsh realities of life on the street. Both boys and girls face high levels of verbal, physical and sexual abuse.

Behind their smile often a whole tragedie is hidden. And some of them no longer know what is smiling.

In poor countries, like Niger, the blind men and women have seeing-eye children as their guide. Day in day out the blind are led through the streets begging for food. A great responsibility rests on the shoulders of these young children, literally and figuratively.

They are part of town life. Most of them are led by their own children or grandchildren. Unfortunately these children are unable to attend school, as they have to spend whole day guiding. Not to mention the lack of a carefree childhood. Beyond their control, they form a symbiotic couple with the elder blind. Their own person is being ignored in favour of the benefit of the blind.

Development happens through jobs. They allow families to escape poverty, individuals to develop skills, but lots of groups are excluded such as women and youth to gain economic independence. Unfortunately in West Africa the informal sector accounts for approximately 50% of national output, over 80% of employment, and 90% of new jobs.

As for Niger, many children work in the informal sector, they are paid just enough to get food and shelter. Of course those small jobs offer a better quality of living than the one on the street. Those living in families can afford to save something and even spend a small amount on fancy things. The latter are really a minority. Even fewer young people grow up in wealthy families and have the opportunity to study at private schools in the capital. A very small minority has real prospects.